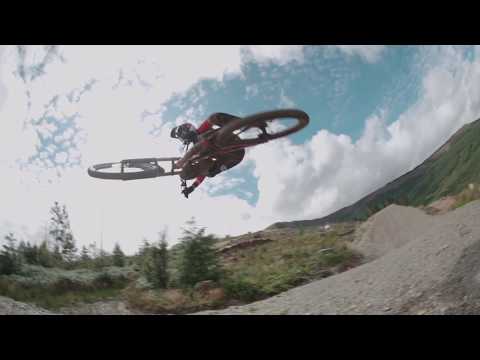 Bike extreme sports videos. Dan is up at 4.30am again and heading up to sculpt the bike park trails – nothing unusual in that to be fair but finding Gee Atherton in the digger IS a bit of a surprise!

It’s a great week for the team at National Champs as Rachel takes her 6th consecutive and 10th career National Champs win and Kade and Luke both podium with 3rds – not bad going for first years in their category. At practise Rach is nervous after watching “everybody” crash in the bottom section but its business as usual come Finals when she nails her run in the accustomed style to claim her 6th consecutive year wearing the Champions sleeve at “the perfect British race.”

Meanwhile Gee is repping the team in Munich and the “legs on fire” challenge but some of the Trek staff are less than impressed with his pedalling prowess! Rach shows us her motocross bike and gets stuck in a bog and the guys hit up the Dyfi trails where a huge session goes down with Dan, Gee and Gaz making Rach pedal to keep up, everyone is pretty tired at the end of the day but the team take their last shred of energy to Dan’s home-made skatepark for just a couple more thrills and spills!